In the eighteen month gap between completing my Masters and beginning my PhD research I completed a residency at Bank Street Arts in Sheffield. I’m currently editing a draft of my PhD submission and have been revisiting old work in order to think about the project and to discern what different works contributed to me project. Gone is one such work. What follows is a descriptive passage from the current draft of my thesis, slightly edited for clarity as the original text makes reference to other passages:

In July 2010 I stumbled across a grainy black and white photograph of an old-fashioned gallery wall online. There was no text, just an image tucked into the top left-hand corner of an otherwise white browser window. Edges of large paintings with thick ornate frames surrounded the top and sides of a central void, below which was a wooden panel. In the centre of the image were what looked like four scars. After some searching I discovered that the centre of the image, while largely empty was actually the most interesting part of the picture: it shows the space where the Mona Lisa had hung prior to its theft by Italian patriot Vincenzo Perrugia in 1911.

Gone was a large reiteration of this photograph, painted in oils directly onto a gallery wall. It was made over a two-week period during which the gallery was open to the public, providing visitors with an opportunity to see and discuss the work with me while it was being made. 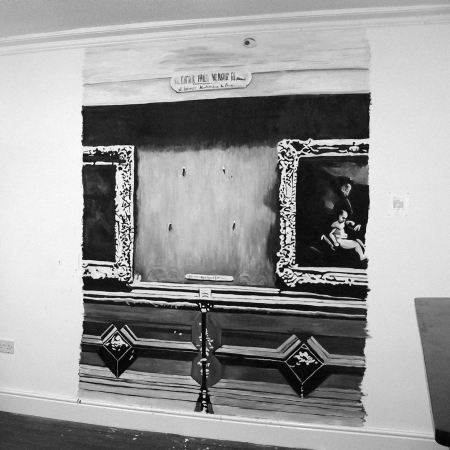 While I worked, the room contained a large table with paints, turps, rags, and other oil painting paraphernalia. The method of making was awkward and required a degree of improvisation on my part: the photograph was cast onto the wall by an overhead projector which meant that my shadow, too, was cast onto the wall. This forced me to work from the periphery of the image as well as deliberately blocking the light and on occasion turning the projector off to check my progress. Visitors entering the space would have been aware of the projector’s bright light, the noise of its fan, and the smell of turps, as well as the image being made.

Any documentation of Gone is flawed, as it conveys only a partial impression of the work and would also lack the conversations I had with visitors. These touched on the work’s putative subject matter (the theft of the Mona Lisa), as well as including stories about trips to Paris and the Louvre and more specific discussions about the difficulties with which I was wrestling and what would happen to the piece when it was completed. After two weeks I finished working and the supporting paraphernalia was removed from the gallery, leaving only the painted wall.

Gone was displayed for a month before being hidden behind a plywood stud wall, where it remains. A short film was made of the ‘cloaking’ and can be seen here:

This screening of the image from sight chimed with the subject matter in that the image would remain present, but missing after completion. A few weeks after the image was hidden a small plaque was added to the wall to mark the absence (and presence) of the work. 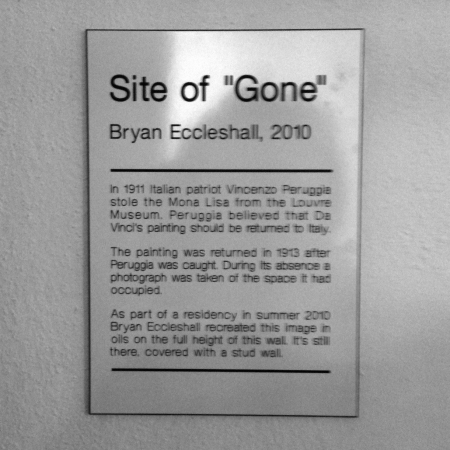 I had been told, when proposing to make Gone, that the wall was due to be covered. Knowing Gone would be covered up soon after its completion heightened my awareness of the temporality of the piece which led me to consider what might be meant by the definitive form for a work.

I’m still making art work based on other art works (though strictly speaking there is no ‘art’ in this image, except at its edges) and I’m still trying to work out the implications of that. This piece still bothers me as my voice is interposed between the source image and the audience. While I was making it, that voice was literally present in the room in the form of conversations, but is now resides in the marks and gestures encoded into the paint, that are of course hidden and yet present.

Some reflection on Gone from the thesis:

Although intended as an investigation into authorship and absence through reiteration, making Gone in public exposed the audience to the space of production which altered my understanding of the work. Painting Gone in oils was a complex task requiring a degree of competence that was by no means certain and as I acquired new skills my experience of making changed. I had previously considered the making process unimportant when compared with the results of that process; any techniques or processes I used to make work were the means to an end, with the resulting object being my principle concern. I had typically employed simple reiterative techniques like tracing along with the use of image-manipulation and typesetting software to make work and while always keen to do a good job, this required less subtlety than handwork, being predicated on quantitative not qualitative learning. How well the work was carried out became important. By making work that was ‘resistant’ I became aware of the importance of making in its own right and how it could allow a work to critique its own materiality as well as its authorship.

One thought on “An Old Project: Gone”